In two days, I will be glued to the television screen. Why, you may ask? Because, my friends, this Sunday is the 2012 Tony Awards; AKA: theater geeks’ Super Bowl. Sunday night is the night my theatrically deprived soul lives vicariously through the monologues, musical performances, and jazz hands featured on this 2-hour broadcast. Not to mention the fact NEIL PATRICK HARRIS is hosting! AGAIN! So, in honor of this important day, I have decided to list my Top 5 Musical Men (AKA: the men I wish were real so I could marry them.) along with video proof of their awesomeness.

Everyone loves a country boy. And this guy is sweet, romantic, funny, and fights for his woman. Not to mention the fact that he sings one of the most romantic songs ever written (Just go to 3:50 on the video).

4. Jimmy (Thoroughly Modern Millie; the movie-musical, not the stage musical)

Jimmy appears to be a nerd on the prowl for a lady-friend but it turns out (SPOILER ALERT) he’s actually a mega-millionaire looking for someone to love him for who he is and not his money. He is polite, quirky, smart, and doesn’t care what people think about him. PLUS, he has mad dance skills 😉

Hugo is a classic boy-next-door who meek, humble, and sweet as apple pie. What put him on this list though is his chivalry and old fashioned-ness. Did I mention he rocks the cardigan?

2. Motel (Fiddler on the Roof)

Fiddler on the Roof is my favorite classic musical of all time so its only natural that one of the characters make it on this list. Motel is a poor tailor who grew up with Tevye’s (the main character’s) older daughter, Tzeitel. They pledged their love for eachother as children and have to face the grim realty of arranged marriages in hasidic Jewish culture. However, Motel (with some aggressive encouragement from Tzeitel) stands up to Tevye and the match maker, declaring his love for Tzeitel and proclaiming that, “even a poor tailor is entitled to some happiness!”. LOVE HIM.

Any of them. They are all amazing. These backwoodsmen had very little to do with women due to the fact they lived miles away from town on their farm, working their butts off. They were scruffy and rude until their sister-in-law moves in and refines them. Then these diamonds in the rough turn into the most chivalrous, mannerly, kind, and considerate men you could find in the Ponderosa. I love them so much, I married one of them. 6 times! Ok ok, so I didn’t actually marry them. I had the opportunity to be in this musical as “Liza” who marries Dan Pontipee (I’m in blue). 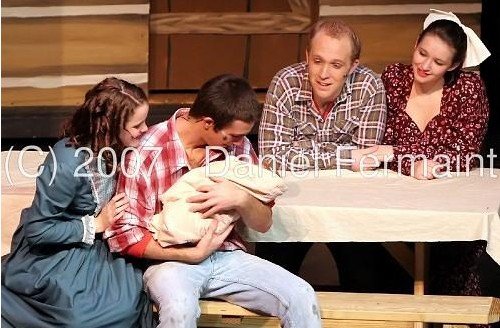 One thought on “My Top 5 Musical Men”